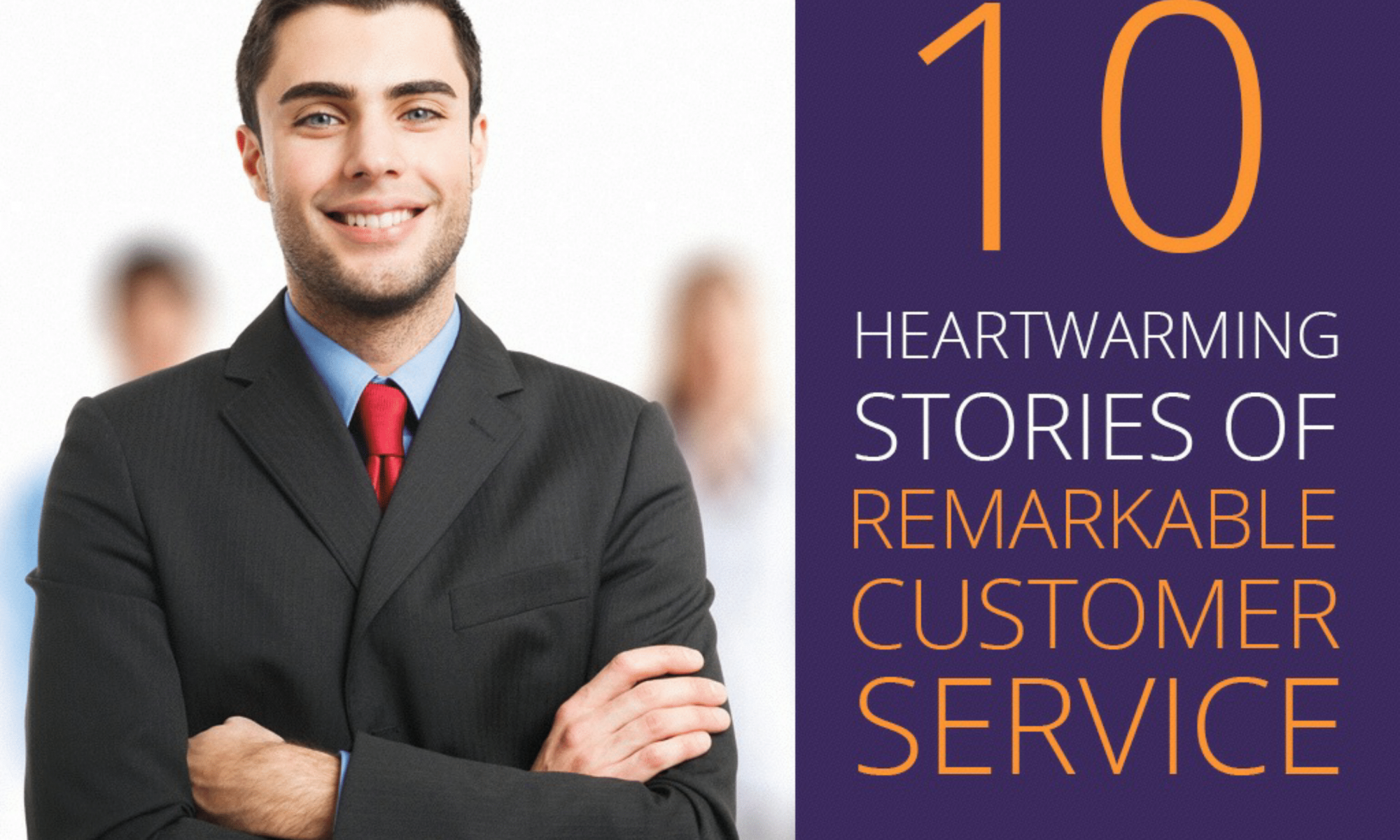 If we are to define the real principle of customer service, it all boils down to one single and simple word – CARE. In order to provide customer satisfaction, deep understanding of what customers want and need is important.
In this present time, great customer service becomes the lifeblood of businesses. Delivering an incredible customer experience to consumers is the top priority of many companies, and this is what keeps some firms way ahead of the competition. They stand out for doing things for their customers that most others wouldn’t. More than delighting and surprising customers, they are ready, willing, and able to go the extra mile for each and every one of their customers.
Last year we did a roundup of these amazing customer service stories, but because there are just too many to share and to learn from, we thought we should do another one! Here are ten heartwarming stories of outstanding customer service performed by those businesses who “walk the talk” when it comes to delivering the kind of service that wins a customer over for life.

1. Ritz-Carlton Produces Specialized Eggs and Milk for a Kid Who Has Food Allergy

One family vacationing at the Ritz-Carlton hotel in Bali, Indonesia had carried specialized eggs and milk for their son who suffered from food allergies. But upon arrival, the eggs had broken and the milk had spoiled.
The Ritz-Carlton manager and staff explored the town but could not find any of the special items for the kid’s food. Luckily, the executive chef remembered a store in Singapore that sold them. He contacted his mother-in-law, had her purchase the items and fly to Bali to deliver them.
The family and the boy were completely overjoyed and thankful to the staff who worked beyond their call of duty.

2. Wendy’s Employee Protects an Old Man From the Rain

A Wendy’s employee removed an umbrella from one of their store tables to walk an elderly gentleman to his car during a heavy rainstorm. Despite the pretty harsh weather, the worker managed to leave his tasks, went outside and protect the old man from the rain.
A netizen was able to capture this heartwarming moment and posted it in Reddit which instantly went viral on the Internet.

Kerry Drake took flights on United Airlines to see his mother who was facing her final hours. If he missed his connecting flight, he would likely not see her before she passed away.
When his first flight got delayed, Drake broke down into tears on the plane. The flight attendants found out what was wrong and relayed his dilemma to the captain, who radioed ahead to Drake’s next flight. The flight’s crew responded by delaying the flight’s departure to make sure he got on board.
Drake made it to the hospital in time to see his mother. Later, he wrote the staff a heartfelt thank you letter expressing his huge gratitude.

Bungie Studios, one of the most beloved game developers, did an exceptional way of greeting an avid fan on Christmas.
A kid was about to receive a liver transplant surgery. Since being in the hospital left him unable of playing the newest release of his favorite video game – Halo, his father reached out to Bungie. As a response, the entire Bungie team signed and sent a get-well card to his son. The team also built a custom helmet based off of the main character and gave it to the boy along with shirts, toys and custom art from the game’s designers.
The father posted a thank you thread on Reddit along with their pictures on Christmas day, which was when Bungie visited his son in the hospital and brought the Christmas gifts.

A man ordered a PlayStation at Amazon which sadly got snatched from his doorstep after being delivered to his address. Devastated of the misfortune, the Amazon customer called the company to beg and see if there was anything that could be done as his son was expecting a PlayStation for Christmas.
Much to the customer’s expectation, Amazon replaced the lost PlayStation, and didn’t even charge him for shipping. Best of all, it arrived in time for Christmas!

6. Trader Joe’s Delivers Food to an Old Man Affected by Snowstorm – For Free!

An 89 years old man was snowed in at his home in Pennsylvania, and his daughter was worried that he wasn’t going to have access to enough food. The daughter called multiple stores to look for anyone who could deliver to her father’s home.
She finally got ahold of someone at Trader Joe’s who told her that they also do not deliver … normally. But given the extreme circumstance, they told her that they would gladly deliver directly to his home.  They even suggested additional delivery items that would fit perfectly with his father’s special low-sodium diet.
After the daughter placed the order for the food, the employee on the phone told her that the food would be delivered free of charge. Less than 30 minutes later the food was at the man’s doorstep!

On her blog, entrepreneur Laura Click shared her unforgettable customer service experience with Brydge, a keyboard provider for iPads. Laura was so eager to get an iPad keyboard before her cross-country flight. Knowing the company’s shipping takes three days, she sent an e-mail and direct message on Twitter to Brydge requesting for an earlier arrival.
The company responded immediately via Twitter and said they would work to find a shipping solution to give the iPad keyboard in time. After a series of quick emails, the product was ready for delivery a day before her flight, with a 10 percent discount.

An old woman called a customer service representative of a computer company because her netbook wasn’t working. Having recently suffered two strokes, she explained that she was struggling with writing, and she called to get help on her malfunctioning netbook. The service rep initially explained that the common thing to do was to mail it in for repairs. The news got the woman crying as she was dependent on the netbook to communicate with her daughter stationed in Hawaii and her deployed son-in-law.
The support rep quickly exchanged the netbook for her (sending her a new one), and even spent the extra time helping her set up the old passwords and account names, in addition to re-downloading Skype so she could talk with her family.
Few months later at the office, the service rep was surprised by the woman on the phone with a thank you card and an Aloha teddy bear.

Brandon Cook was visiting his dying grandmother in the hospital who was ill with cancer. The old woman complained that she desperately craved a bowl of soup and that the hospital’s soup was inedible. She said she wanted a bowl of her favorite clam chowder from Panera Bread!
But Panera Bread only sells clam chowder on Friday. Brandon called the nearby Panera and talked to store manager Suzanne Fortier about his grandmother’s situation. Not only did they make clam chowder especially for Brandon’s grandmother, they also included a box of cookies as a gift from the staff. It was the last meal Brandon’s grand mother ate before she passed, and Brandon and his family was grateful to the Panera crew.

Avid Lego fan Luka Apps spent all of his Christmas money on a Ninjago (Lego ninja) named Jay XZ. He brought his Ninjago on a shopping trip but unfortunately lost it.
Luka wrote a letter to Lego explaining his loss and requesting the company to send him another one. The response he received from a Lego customer support representative named Richard was nothing short of amazing.
“Luka, I told Sensei Wu that losing your Jay minifigure was purely an accident and that you would never ever ever let it happen ever again. He told me to tell you, “Luka, your father seems like a very wise man. You must always protect your Ninjago minifigures like the dragons protect the Weapons of Spinjitzu!” Sensei Wu also told me it was okay if I sent you a new Jay and told me it would be okay if I included something extra for you because anyone that saves their Christmas money to buy the Ultrasonic Raider must be a really big Ninjago fan. So, I hope you enjoy your Jay minifigure with all his weapons. You will actually have the only Jay minifigure that combines 3 different Jays into one! I am also going to send you a bad guy for him to fight! Just remember, what Sensei Wu said: keep your minifigures protected like the Weapons of Spinjitzu! And of course, always listen to your dad.”
Awesome.
We hope these stories gave you exceptional inspiration to pass on to your customer support team!

This website uses cookies to improve your experience while you navigate through the website. Out of these, the cookies that are categorized as necessary are stored on your browser as they are essential for the working of basic functionalities of the website. We also use third-party cookies that help us analyze and understand how you use this website. These cookies will be stored in your browser only with your consent. You also have the option to opt-out of these cookies. But opting out of some of these cookies may affect your browsing experience.
Necessary Always Enabled
Necessary cookies are absolutely essential for the website to function properly. This category only includes cookies that ensures basic functionalities and security features of the website. These cookies do not store any personal information.
Non-necessary
Any cookies that may not be particularly necessary for the website to function and is used specifically to collect user personal data via analytics, ads, other embedded contents are termed as non-necessary cookies. It is mandatory to procure user consent prior to running these cookies on your website.
SAVE & ACCEPT